With low, low interest rates, refinancing is all the rage these days.  But how do you know if refinancing is right for you?  Ultimately, refinancing can save you money, whether in the long term or short term, so lets take a look at a few issues that you'll eventually have to consider when thinking about refinancing.

What are You Trying to Accomplish?
To set the record straight, refinancing only restructures your debt, it does not pay any of your debt off.  So to keep things in perspective, refinancing your loan is synonomous with restructuring your loan.  Here are the three main reasons one might choose to refinance their loan.
When to Refinance
When looking to refinance there are a few things to consider.  First, consider if your mortgage has any pre-payment penalties.  Some do and some don't.  You could wind up costing yourself more money if you aren't aware of these penalties.  Secondly, you need to recoup the closing costs with your decreased monthly payments.  If your closing costs would be $3000 and mortgage savings would be $150 per month, you would need to own your home for at least the next 20 months to benefit from the refinancing.  Any lender or mortgage broker will be able to help you identify your anticipated closing costs from a loan.  Lastly, as a rule of thumb, when current mortgage rates fall about 1% lower than your mortgage rate, that could be a time to start thinking about refinancing your rate.

I'll leave you with a few great resources if you have questions about mortages and refinancing:

Why You Should Love Housing Statistics

Did you ever have to take a statistics course?  Do you remember hating your statistics course?  I'm hoping by the end of this post you'll learn to love some housing statistics.  Why?  Because they are the lifeblood of my industry, and a major indicator of the economy as a whole.  And it isn't rocket science.  In the following post I'll give you a break down and update you on some national and regional housing statistics so you can wow and amaze your friends at dinner parties.

Pending Home Sales Rise
According to the National Association of Realtors (NAR), the Pending Home Sales Index rose to 79.4 in July, up from 75.5 in June.  Now, those numbers don't really mean anything unless you put them in context.  The Pending Home Sales index is a leading indicator for the housing sector.  This number is based on a sample of about 20 percent of national pending home sale transactions.  Historically, the number of pending home sale transactions has been a very close indicator of actual closed transactions, so the pending home sales index gives you a sneak peak of closed transactions within six to eight weeks.  Where does the number come from?  Well, just like most other indexes, they are based on an arbitrary starting point.  Our starting point happened to be in 2001, when the number was created.  An index of 100 was arbitrarily assigned to the average pending home sales during 2001, which also happened to be the first of five years of record existing home sales.  For example, if the index is below 100, we are experiencing a slower market as compared to 2001.  If we are above 100 we are experiencing an accelerated marked as compared to 2001.  So to sum up, our current national pending home sales index is at 79.4 for July 2010, which is about 19.1% lower than July 2009.  Remember, these numbers are national numbers...Lets take a look at how things are regionally.

Above you'll find some sales information for the Fort Collins area.  In the hustle and bustle of 2007, when everyone was just cruising along, enjoying caviar and champagne, life was good.  364 homes sold for a median of $240,000 in just under 3 months.  Then, things changed.  The stock market took a dive, unemployment fears escalated, and a recession began to rage on.  What changed in the housing market in 2008?  Well, to me, not much.  You could still sell your home for about the same price as it sold for the year before, you'd just have to wait an extra week or two to get it sold.  Not the end of the world right?  Lets look at 2009.  About the same number of homes sold in July of 2009 as they did in 2010, which is good.  What's bad is the median price of those homes took a small dive.  In 2009 we were in the height of the recession, the stock market had bottomed out in early March and things were looking gloomy.

Fast forward to the present.  What is the difference between July 2010, when things are apparently bad, and July 2007 when the recession was just a twinkle in Ben Bernake's eye?  Number of solds are down about 45% and you'll have to wait 19 extra days to sell your house.  Did you notice what didn't change?  The median price of homes was only down $1000.  If you can get nearly the same price for your home as you did in 2007, what is causing the drop in home sales?  I've said it before and I'll say it again, fear is the reason people aren't selling their homes.  They are fearful that they will lose their jobs, fearful that they won't be able to sell their homes and they owe too much on their mortgage to sell their homes; they are just fearful folks in general.  To me, its understandable, but not founded.  Overcoming fear will be the best way to overcome this recession and get the economy back on track.  I'm not saying our housing market is accelerating, but I can say that the numbers indicate that it is steady.  So what are you waiting for?

Every once in a while, I'll post some very technical concepts and try to break it down into simple, understandable ideas that are very applicable in common situations.

Everybody knows about foreclosures; you get behind on your mortgage payments and the bank reclaims your home.  It's just the same concept as getting your car repossessed, only foreclosure involves a long drawn out process where the bank slowly recoups your home and auctions off your home to try and salvage any remaining value.  Foreclosures involve hefty fees for the bank, and unfortunately, will ruin the credit scores of the borrowers.  One way to avoid foreclosure is to negotiate a short sale.

A short sale can be negotiated between the borrower (homeowner) and the lender (usually a bank or mortgage provider).  Instead of forcing foreclosure on the property due to lack of payment, the homeowner and the lender mutually agree to try and sell the home at a discounted price, where the homeowner turns over all the proceeds to the lender.  Usually, a short sale is the most economically feasible solution because it is typically faster and less expensive than foreclosure.


How Short Sales Benefit the Lender (vs. Foreclosures)

How Short Sales Benefit the Borrower (vs. Foreclosures)

Now, there are downsides to short sales as well.  In most cases, there is a deficiency, which is the remaining money owed following the short sale.  In many situations the borrower is not off the hook for the deficiency unless it is clearly indicated on the acceptance of the offer, but the debt can be controlled and financed.  Also, there is no guarantee that the lender will agree to the short sale offer.  Lenders typically have loss mitigation departments to deal with short sale offers.  Their loss mitigation departments usually have a set of criteria including amount of equity and anticipated sale price that they use to evaluate the potential in short sale offers.  With the recent financial crisis, lenders have been more willing to accept short sales than force foreclosure.

Sometimes in life, situations arise where you might find yourself struggling financially.  If you are upside-down on your mortgage or behind on payments, you do have options.  Take the time to educate yourself to know whats available to you. 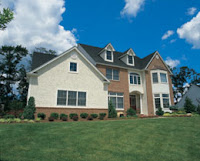 Today, 1 in 20 homes are in foreclosure.  There is plenty of talk out there about how lenders are tightening their lending practices and standards to avoid one of their financed homes from being an addition to that statistic.  That being said, with 30 year fixed rates below 4.5%, an abundance of inventory, and depressed home prices, I believe now is one of the greatest times in recent history to purchase real estate, that is, if you can qualify yourself first.

What About Finances?
First things first, lenders are going to expect your financial situation to be in order.  Most lenders are satisfied with a down payment of 10-20% but a down payment isn't the only hoop you'll have to jump through to purchase a home.  Lenders will focus on your ability to pay your monthly mortgage along with the associated taxes.  A good rule of thumb is that your monthly home expenses should be no more than 25% of your total household income.  For example, if your family brings in $5000 per month, the costs associated with your home should be no more than $1250 per month.  If you are over that percentage, it might be a good idea to re-determine your needs and potentially downsize your home expectations.  An experienced realtor can help you understand exactly what you can afford.

Your Crazy Life...
Life is very uncertain.  Getting into a home at the wrong time in your life could be quite a disappointment.  Job security is the main concern for most, simply because if they lose their income, they can lose everything.  If you are comfortable in your job, it may be best to set aside an emergency fund, just in case your employer isn't as comfortable with you.  Family obligations are another major concern.  Be certain that when you're planning on buying your home, that your family can still expect you to fulfill your normal obligations.  Buying a brand new home and commuting an extra hour per day could really put a strain on your relationships.

The Upside
With the right discipline and planning, home ownership is substantially more beneficial than renting.  Building equity, and making your house a home will always be beneficial in the long run.  Be sure to look within to determine exactly what you can afford.  Chances are you'll be very happy with your decision to buy, especially in this market. With a very small time investment and the right realtor, you can make your dreams of home ownership a reality.
Posted by Jared Reimer at 11:33 AM 1 comment:
Email ThisBlogThis!Share to TwitterShare to FacebookShare to Pinterest
Labels: Buying, Fort Collins Real Estate, Loveland Real Estate, NoCo, Personal Finances

I'd like to take this opportunity to welcome you to my new Real Estate blog.  This blog is specifically designed to keep you up to date on real estate news that is important to you.  The real estate market is ever-changing and you can count on me to provide you with the information you need to make educated decisions when buying, selling or investing in real estate.  Its a big decision and you deserve someone you can trust.

Some topics of interest that I will discuss in the coming weeks and months are:  finding the right real estate agent for you, buying your first home, selling in a depressed market, understanding interest rates, prepping your home for an open house, uncovering financing options, and much, much more.


Occasionally you will see posts with links to my most recent listings to give you an idea of my current inventory.  As always, I am open to your comments or questions and would be happy to create posts that help you better understand your specific market.